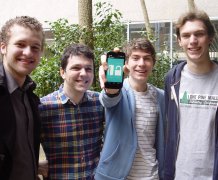 Students from the University of Exeter have stormed to victory in an international competition, with their innovative app that allows users to lock and unlock doors with their mobile phone.

The winning entry, called ‘LockDuino’, allows doors to be locked and unlocked remotely via a mobile phone app, which connects to a small Arduino microprocessor that runs the locking system. The design also allows users to receive a message to their phone if they have left it unlocked, once they reach a certain distance away.

The LockDuino faced rivals from the UK and the United States in the latter stages of the contest. At the final count, they had polled more than 600 votes – twice as many as the next leading entrant -to take first prize.

Speaking after securing victory, George said:  “The whole team was delighted to hear the result of the competition. We're excited, proud and somewhat surprised to have won, especially by this considerable margin.

“We were up against some really tough competition and weren't sure how our design would hold up. Thankfully, we were able to defeat the other universities' impressive and equally innovative entries.”

Project Arduino required the students to build a piece of equipment, using the Arduino open-source electronic microprocessor platform, which tied in with the Thales business areas - transport, aerospace, defence and security.

Four teams from Exeter initially entered the local heats of the competition late last year, where representatives from Thales chose LockDuino as the winning design. The team then faced entries from the University of Reading, as well as Caltech and the University of California, Irvine, both in the US, in the final showdown.

Dr David Wakeling, Lecturer in Computer Science and who encouraged the students to take part said: “The team have performed exceptionally well  throughout the competition, and we are all delighted that they have won. They have showed a remarkable level of skill and creativity to produce this excellent system and this victory is well-deserved.”

Professor Ken Evans, Dean of the College of Engineering, Mathematics and Physical Sciences, congratulated the students on their success.  He said: “This is a wonderful achievement and richly deserved. It was a fantastic feat to make it to the final vote, and to emerge as the winners against some excellent international opposition is testament to the innovation and enthusiasm the team have displayed from the outset.

“We are absolutely delighted for Ashleigh, Matthew, George and Joshua, and congratulate them not just for winning, but also for the excellent device that they created for this project.”

Team member Matthew added: “We are all very grateful for the time and effort the University put into helping our team, especially Dr David Wakeling who told us about the competition and advised us at every stage, and the University's Computer Science Society for their support. We also want to thank everyone that took the time to vote, it has capped an amazing experience for us all.”

The winning entry can be seen by visiting https://www.thalesarduino.com/arduino