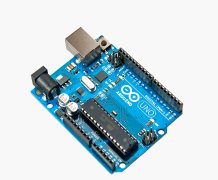 A team of Exeter students have reached the final four of an international competition, designed to showcase technological innovation.

The Computer Science undergraduates devised a ground-breaking home security system, which allows doors to be locked and unlocked via a normal mobile phone.

The four-strong team of Matthew Gilbert, Joshua Holmes, George Young and Ashleigh Udoh were one of around 20 university teams from across the UK and the US to enter the Project Arduino competition organised by Thales, a leading engineering and technology company.

They are now one of four teams facing a public online vote to decide who will be the overall winner.

Competitor George Young (BSc Computer Science and Mathematics) said:  “It has been a really eye-opening experience, not only on how we were able to make our design using the Arduino, but how other groups were able to make something completely different than us but with the same equipment we had.

“We are all delighted to have made the final four, and hope we can go one step further and win the competition overall.”

Project Arduino required the students to build a piece of equipment, using the Arduino open-source electronic microprocessor platform, which tied in with the Thales business areas - transport, aerospace, defence and security.

Four teams from Exeter initially entered the local heats of the competition, where representatives from Thales chose ‘Lockduino’, the design for producing an embedded controller for a door-lock, which allows it to be checked, locked and unlocked via a mobile telephone, as the winner.

Dr David Wakeling, Lecturer in Computer Science and who encouraged the students to take part said: “The team have performed exceptionally well to reach the final four of this competition, it is a quite remarkable feat.

“The great thing about this competition is that the public decide the winner, so there is chance for everyone to have their say as to which project is not just the most innovative, but also the most useful. We’d like to encourage as many people as possible to support the team, and vote for Exeter.”

To cast your vote for team Lockduino, please visit http://www.thalesarduino.com and follow the instructions. Voting closes on Monday, February 23 at 5pm UK time.